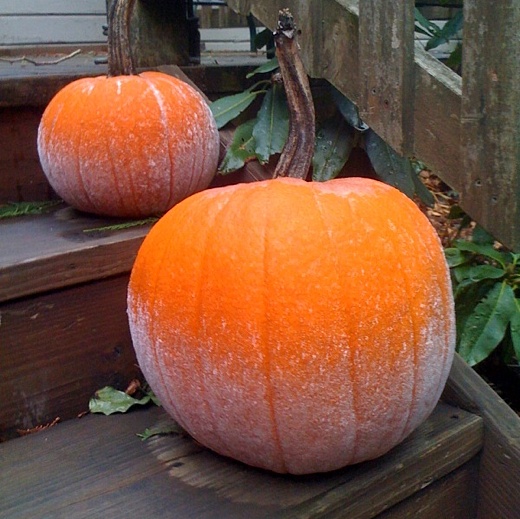 The Frost Is On The Pumpkin

Its mid-October, I love this time of year. Although I live in the Carolinas, temperatures soared into the mid-nineties up until last week. Unseasonably hot for this boy raised on the chilly shores of Lake Erie. Not complaining, there is a reason why this Buckeye moved south three decades ago. Snow, I love it, don’t miss it, and certainly would rather drive to it than try to drive out of it. I sure as heck don’t want to shovel it. Especially the wet snow, as heavy and dense as soaked sand.

There is something magical about this change of season. Old Blue Eyes romanced it with Autumn in New York. It’s the reverse of spring. Bright tulips of crimson and sunshine give way to leaves of copper and orange. The smell of spring, as sweet as bees making honey transport us to a rickety trailer pulled by a vintage tractor. It’s a hay ride, a bon fire and your best friend strumming his six string as friends harmonize. Singing, strengthened by cinnamon schnapps in a shared flask. Belting out the soundtrack of their lives. The fire spits and hisses as the smoke disappears into the brisk star studded night.

Tis the season for root veggies and fall fruits, the persistence of parsnips, the poise of pears, and the pizzazz of pumpkin. That omnipresent orange orb, it commands, fall is here! Charles Schultz created the Great Pumpkin Charlie Brown. First aired in 1966, it still brings a laugh viewing it 5 decades later from when I first watched it. Billy Corgan named his band the Smashing Pumpkins. Those who live fairy tale lives are fully aware of what happens to their carriage at midnight.

For us who are more grounded in our pumpkin appreciation, we celebrate the king of autumnal edibles. They have been painted, beaded, bejeweled, bedazzled and razzle dazzled. Nary has there been a vegetable so dressed up as the humble pumpkin. Kids carve it, greeting trick or treaters with an eerie glowing grimace. Pumpkin pie is the pièce de résistance at the Thanksgiving table. Every year chefs dig deep to create something new with the bright orange globular gourd. I’m reminded of the scene in Forrest Gump. Bubba is informing Forrest all ways to prepare shrimp. Calling shrimp the fruit of the sea. Well, pumpkin is the fruit of the field.

That’s who we are as chefs, and as Americans. We are a nation of innovators, freewheeling, mavericks with a can do attitude. We channel Escoffier, our spiritual grandfather, for that je ne sais quoi. That flash of brilliance to transform the pumpkin into something extraordinary. Bubba didn’t mention roast or stuffed. In honor of Bubba, this cinephile is naming this dish after him.

1 (10- to 12-lb.) Long Island Cheese pumpkin, also referred to as a Cinderella pumpkin

(it is flatter with deeper ribs)

Stir tomatoes, mushrooms, sausage, parsley and sage into stew. Ladle stew into prepared pumpkin. Place pumpkin top next to pumpkin on the pan. Bake at 350°F for 1 hour or until pumpkin flesh is tender and easily scooped from the sides. Serve stew along with spoonful’s of pumpkin.