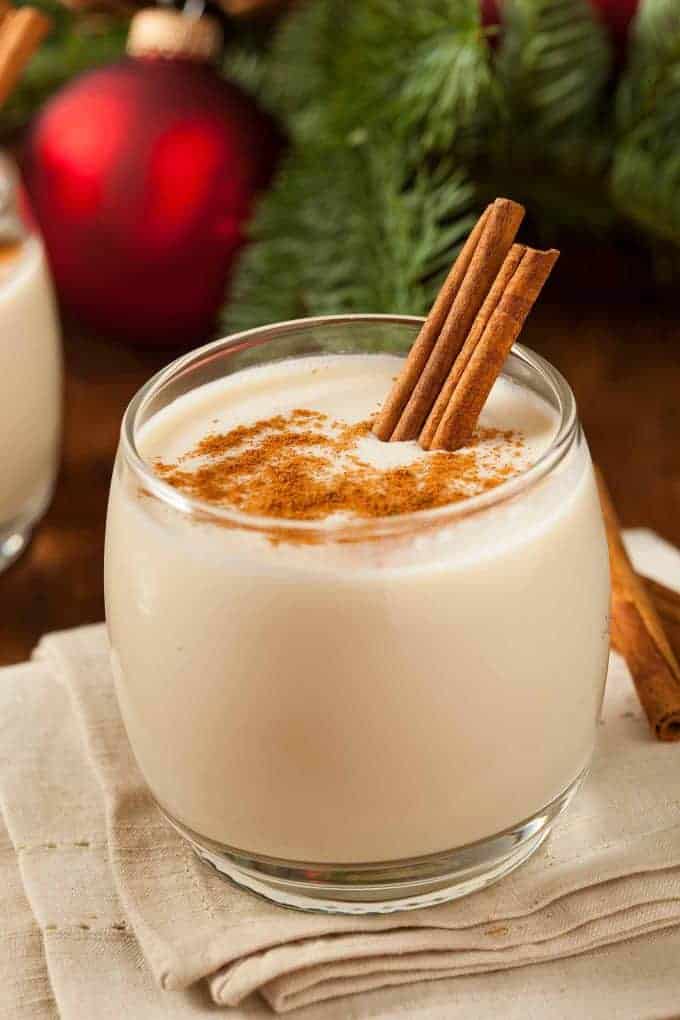 I will go on the record. I am not a fan of eggnog. However, my wife Doti fresh from the Philippines has never had the seasonal lactose treat. By and large dairy is not in the Asian food pyramid. Name one great Asian cheese. Name one great Asian wine. No sour grapes here, It’s just the whey of the world.

“Babe why that look?”

“Oh nothing, I don’t like it, but you need to try it and I will make you some.”

“It’s really nothing more than spiced thickened milk, I may as well drink creme anglaise.”

That’s milk, cream, and egg yolks cooked together to make the base for ice cream.”

“Well whats wrong with that?”

“Nothing other than I prefer it in its frozen state.”

“Oh, well can you make me some eggnog?” “I know it’s traditional here I’ve always heard about in the Philippines and never had it.”

Well never say never and to the kitchen I went. The ingredients for eggnog are few and common.  While not a fan of the fat laden, artery clogging sweet beverage I began to focus on whipping up the best eggnog this side of Cebu.
For the nutritional police, whom I ignore, my belly is my alibi. Eggnog is the enemy, the dark side of all Xmas sweets. Just one cup of this holiday heart stopper packs 350 calories. More if you add alcohol, and you know you will. Cholesterol, just 150 mg. That’s as much as two double cheeseburgers, two fries, and two sodas. I’ll stick with my cheeseburger in paradise.

Placing milk, heavy cream, cinnamon, split and scraped vanilla bean in a pot I bring it to a low simmer. Don’t scrimp here and substitute vanilla extract. It’s Christmas, splurge. The difference is significant. The aroma, the micro black specks awash in white is a promising visual of the goodness to come.

There is zero skill in twisting a lid off a flavoring extract bottle. Slitting a vanilla bean from tip to tail is impassioned finesse. Exposing billions of black bits, the scent, subtle, sublime, sexy.  Seductive, like the rarest perfume. Theres a romance between chef and raw ingredients. The cutting board is the dance floor. The chef always takes the lead. Sharp, a whirl in white, unified with seasonal bounty. Becoming a tango, teasing, tantalizing, tickling the tongue.  While generally reserved for desserts I have infused vanilla to arouse roasted root vegetables.  Paired it with lobster, enhancing the natural sweetness of the prized crustacean. It’s wonderful infused into oil and builds a unique level of flavor with fennel.

Separating room temp yolks from whites I put the yellow blobs into the bowl of my KitchenAid along with some sugar, but not too much. I prefer things more rich than sweet. I crank that baby on high and let er rip to create a bright sunshiny thick mass. Minutes later shutting down the mixer, the mixture glistened as voluminous yolks drooped from the beaters.

Now to temper the eggs. Temper is a technique to equalize a temperature of two ingredients that will be combined. In this case, eggs and milk/cream mixture. Adding the yolks straight to the hot liquid could cook, or specifically scramble the eggs. Leaving bits of cooked egg in the mixture, which we want to avoid. With a ladle, wooden spoon or heatproof rubber spatula, pour one ladle at a time of hot liquid into the yolks stirring gently with spoon or spatula. Continue to add one ladle at a time incorporating well in between each addition. Once half the amount of hot liquid is added, slowly pour the tempered egg mixture into the pot while stirring. On low simmer continue to cook until mixture thickens. Best bet, use a digital thermometer and heat until it registers 160°.

Immediately remove the pan from the heat and transfer the liquid into a metal or glass bowl. Chef tip, place the mixture over a larger bowl with ice water (aka ice bath) this will cease the carry over heat and immediately chill the liquid. When pastry chefs make large batches of mixture such as creme anglaise this is an automatic step in the process. Once at room temp, 70° or less place in a proper container with tight fitting lid and refrigerate until well chilled or overnight. Shelf life is 48 hours.

Booze you say? Absolutely, no, not vodka. I’m down with brown. Brandy, rum, the spiced variety is great, bourbon, or whisky, cinnamon schnapps is fun too. Got Goldschlager, the pure 23K gold flakes will deliver a jolly jolt for this festive beverage.

Garnish with whipped cream, a dash of cinnamon and cinnamon stick. If you really want to sex it up utilize the egg whites. Whip them, whip them good, stiff but not dry. You can flavor as you wish, fresh orange zest is fab. Mound the merengue atop the eggnog, break out the blow torch and brown that baby. Want to be a food porn star for IG? Place the meringue in a pastry bag with a star tip and pipe onto the eggnog and brown. This simple technique creates a wow factor. Your guests will spread holiday cheer faster than you can say sweet baby Jesus. Throw a few crasins, pecans, or hazelnuts in the bottom of the glass as a lagniappe.

I was chatting with my friend Christine about eggnog. She was recently introduced, and subsequently became hooked on eggnog latte. Something else I don’t drink, coffee. People are bewildered, stating, “You’re a chef, you were in the Navy, you don’t drink coffee?”  Like Sammy Davis Jr. sang, I gotta be me. There is no need enhance my awareness with Arabica. I’m robust enough without Robusta When I awake, I’m amped up to take on the daily grind. Just the thought of an eggnog latte puts me in a hot toddy tizzy.

I’m concerned for Christine; will she go through withdrawals once the ho ho ho of eggnog becomes a gustatory memory of Christmas past? Will she become ho hum without the custardy caffeine concoction? No, I know her well. she’ll saunter into Spring. Get her Irish up and chill with shamrock shakes, they’re magically delicious.

May your cup runneth over with your beverage of choice.

The method is within the article.