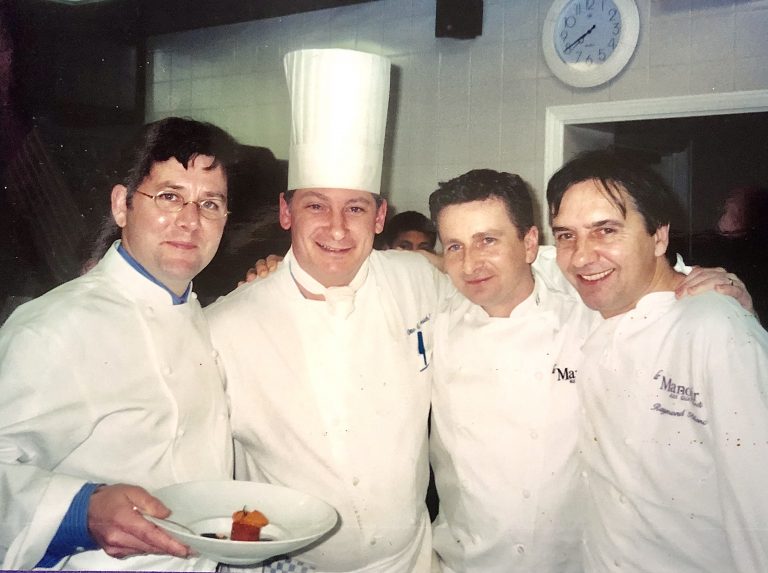 November 5, 2013 is one of those days etched in my memory. I was in Texas, at work, my phoned pinged. An incoming text arrived from my friend Tim Wasylko, a Canadian chef, eh. It was just three words. Charlie Trotter died.

Stunned, I called Tim, “What do you mean Charlie Trotter died?” “How?” “What?” “When?” Tim had few answers, only telling me he just saw it on the internet. Tim knew I worked at Trotter’s and was relaying the information as soon as he read it. Then, like a leaky faucet, texts were dripping in. Each text, another tear. I was in shock on different levels. The first thing that hit me was his age. Just 54 when he passed away. I was born one year after Charlie. Far too young for anyone to die. Yet, that is life, it’ll knock you to your knees, or worse. Without warning punch your personal time card to exit Earth and cast your spirit to the universe.

To say Charlie Trotter was a chef, is like saying Bob Dylan was a singer songwriter. After all, Charlie named his son Dylan, after the Noble Prize Poet. Charlie was in that rare air, the stratosphere of superstar chefs. He soared, burning blindingly in the gastronomic galaxy. His culinary constellation was the one cooks, and chefs, in America and the world gazed into for direction.

Born and raised in Wilmette, just north of Chicago, Charlie singlehandedly transformed America’s Second City, into the number one dining destination in America, and beyond. Charlie changed the game, period. For 25 years his eponymous restaurant served some of the most progressive cuisine on the planet. It all started with the raw ingredients, Charlie had close to 100 purveyors supplying him with the finest food available. Diver scallops, Hudson Valley foie gras, White truffles from Alba, Italy. One never saw a US Foods or Sysco tractor trailer ever parked at 816 W Armitage Ave. But there were countless FedEx sprinter vans parked there. Emergency flashers blinking the drivers dashed in and out with global gourmet goodies for Charlie and crew to create one of a kind cuisine. Such as, Muscovy duck with smoked coconut, spring onion & Venezuelan chocolate. Another astounding fact, in 25 years of operation. Charlie never offered the same menu two nights in a row. Fancying himself a jazz musician, he scoffed at the thought of a signature dish. Moreover orchestrating the brigade into a different version of a dish that was created the night before. Yet each menu was a Magnum Opus, with sold out performances nightly.

Trotters opened in 1987, Chicago was still a very classic Eurocentric dining city. Charlie blew that up and began creating Asian inspired dishes on the menu. Who knew what yuzu was back then, let alone serving it fresh straight from the Korean peninsula? One of my favorite expressions of Charlie’s is, “If it’s not broke, smash it!” Smashed Charlie did. He steamrolled normalcy, to the tune of RFK, “Some men see things as they are, and ask why. I dream of things that never were, and ask why not.”

Charlie stopped serving beer and spirts altogether, stating that those types of alcohol interfered with the delicacy of the dishes he served. He was right Why serve a $25 pour of rare scotch whiskey when you can celebrate with a bottle of 1927 Chateau Margaux? His all vegetarian tasting menus were as thoughtful, genius, and tantalizing as his regular menu. All veggie tasting menus were unheard of then, he continued to smash things. He had a kitchen table, literally a table for 4 in the kitchen. It was the best seat in the house, if you could get it. Any self-respecting chef needs a cookbook, right? His titles of, Meat & Game, Seafood, Vegetables, and Dessert books were so cutting edge when they were published two decades ago, they still deliver a timeless, innovative style. I suggest any home or professional cook buy them, all four.

Charlie did not use cream and butter in his sauces, rather relied on reductions, vegetable purees and herbs, and acid, to let the natural flavor sing. Sure, everyone cooks like that today, but Charlie was doing that in the late eighties. Although at times ridiculed for minuscule portions, each course in a 12 course meal was a gastronomic masterpiece. Think Picasso on a plate with a side of Salvador Dali, topped off with Van Gogh, can you hear me?

Charlie was in a class all by himself. He was his own competition. Fearlessly, ferociously, finding ways to raise the bar of haute cuisine heights. As mind boggling as he was as a chef-owner, a task master, a motivator, getting the absolute best out of everyone he employed. Charlie, above all else was a world class humanitarian. His genius of cooking and business acumen is only second to his compassion and charity. I know, I worked there. I saw it. I felt it. I was a recipient of it. Everyone knows the name Charlie Trotter is synonymous with fine dining and excellence. So few know of his goodness and grace. Charlie, preformed unconscionable acts of generosity, daily.

From allowing homeless souls to sleep in his restaurant after the business day was done and doors were locked, to providing full scholarships for students to enroll in culinary school. I could go on and on, and tell of my stories of which I was on the receiving end of Charlies goodness. But, in remembering Charlie, perhaps its best to hear it from him. What follows is an article he wrote for Wine Spectator, October 6, 2007. That tear that rolled down my cheek 6 years ago today. It came back after reading it. Reading his words sparked my memory. Thus, reading it I recalled his voice, as if he was speaking directly to me. Rest in peace Charlie, gone but far from forgotten. You influenced me to be a better human being, inevitably far more important than being a better cook.

Exceedingly more than an extraordinary chef, Charlie was an exemplary soul. It is imperative the story be told to inspire future generations, not just cooks and chefs, but humanity. Charlie was, and remains an inspiration. A reminder to shine brightly in this cold and dark world. To put others first, to possess a Servants Heart and give generously. As it says in the Good Book, 2 Corinthians 9:7. I don’t say it lightly, putting Charlie Trotter and Augustus Escoffier in the same sentence. They were avant-garde. Their culinary creations, contributions, and conscience forever changed the profession. They transcended the culinary arts. They were world class gentlemen. When future generations speak of gastronomic history, of Apicius, Taillevent, Catherine de Medici, Carême, Point, Brillat-Savarin, Escoffier, Bocuse, Beard, and Child. Charlie Trotter will be in that revered group. Not only for his ultra-artistic cuisine, but far more important, and valuable, his inconceivable kindness.

One of the most appealing things to me about being in the restaurant business is that you have a chance to share a real generosity. It seems to me that to be truly successful as a restaurant owner, a chef, a dining room leader, a sommelier, or any other position in the hospitality/service world, you have to be someone that absolutely and completely gives from the heart. And not just because you think that it might be “the right thing to do,” but because it genuinely comes from within.

At Trotter’s, we charge our patrons by way of something that I refer to as “price of admission.” That is, once you’re in, and you’ve chosen your menu (Grand, Vegetable, Red Wine, Kitchen Table, Raw, Spontaneous) and your wine(s), then there are no other charges. If you finish your “wine by the glass” before you’ve finished your food, more is poured. If you’re still hungry, we keep bringing plates of savory food until you say, “Enough!” If you still have a half-bottle of red wine left going into dessert, we’ll bring cheese and, oh, by the way, we’ll bring cheese anyway if you even bring it up. Bottled water (Fiji or Pellegrino) is poured automatically, right when you sit down. Cappuccino, espresso, tea … drink all you want. Desserts? You have a sweet tooth? We’re just going to continue to bring them. It seems that’s what the dignity of this field is all about. Charge what is appropriate, then don’t be stingy—be generous!

I read a great story about the brilliant Fernand Point, the founder and chef of La Pyramide. He once saw a young couple in his dining room that clearly couldn’t afford the experience. For him, there was no question about it—no check. We’ve followed his lead and done that here about 200 times. Recently we had three young Navy cadets in, in full uniform, by the way. Obviously there was no way they could get a bill. That’s about the 50th time we’ve hosted members of the armed forces.

I guess the bottom line is this—it’s never about the money, it’s always about making sure it comes from the heart.