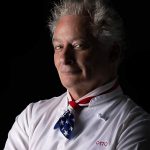 Me, I’m a small town boy with a big city heart. Born and raised in the Heartland on the North Coast of America I love all things Ohio. The Dawg Pound, the Tribe, the Cav’s and the Buckeyes.

I grew up in an agriculture hamlet known as Brownhelm. Sandwiched between the heart of rock and roll and Cedar Point, the roller coaster capital of the world. Born in the new frontier, surviving the tumultuous sixties, I shipped out for the Navy when punk was shattering the disco ball and never looked back. The Navy was my ticket out of the cornfields to the deep sea as a cook on the USS Patrick Henry SSBN 599, a submarine based in Pearl Harbor. I was plotting my course to become a chef.

From the trades winds of Hawaii onto the frigid waters of the Gulf of Alaska as a baker on an offshore oil rig. I was honing my skills, lasered onto a predetermined destiny. The travel bug bit hard. Infecting me with wanderlust, an insatiable appetite for cuisines and culture. Ohio was in my rear-view, as far back as the lower forty. Head east young man.

I devoured the Big Apple ravaging its megalopolis core. It was the eighties, New York City, some who lived to tell the tale equate it to ancient Rome. Decadence, debauchery, and demonstrable deeds of crack, greed, AIDS and homelessness were prevalent as yellow cabs. The city that never sleeps alarmed my lusty soul. Abhorred at the sight of the indigent rummaging through trash to get their minimum daily requirement my heart heeded my head into action. Growing up in the Midwest homelessness and hunger did not exist amongst the grain silos. Yet it darkened the dirty boulevard with shadows as long as the sky scrapers that birthed them.

My salt of the Earth upbringing urged me into action. I became involved in hunger issues and was called to use my gift to feed the less fortunate. All the while employed by some of the best restaurants and hotels. The Pierre Hotel, the Delano Hotel, The Atlantis Resort & Casino, Mardan Palace, the Bellagio, Charlie Trotters and as a Chef Instructor at the Culinary Institute of America. I was, and remain gobsmacked that America can put a man on the moon, yet we have millions in the land of plenty who are starving. Or, must choose between paying utilizes or buying groceries, or worse, children’s school supplies.

After traveling to thirty countries on five continents, feeding the poorest of the poor. I’ve discovered we are far more alike than we are unalike. Freedom is an inalienable human right that transcends race, religion, ethnicity, and economic status. Food, is a fundamental right too. It inextricably connects each and every child of Mother Earth. In a hunger world, there is no such thing as too many cooks.